If your name is Othello, you are due to suspect that there is a conspiracy or two around. Shakespeare is to be blamed for this. To be specific, we are not blaming our chicken called Shakespeare, but the other more famous Shakespeare.  Actually, our Othello is not even named after Shakespeare´s Othello. He is named after Leonie Swann´s Othello. But our sheep getting their name is another story (which should be told in this blog eventually) . But meanwhile, back to Othello´s conspiracy theory.

Most of our sheep are rather down to earth and pragmatic. When the food is served, you go and eat it. In other times they sleep, socialize with their friends, scratch themselves against fence posts and chew the cud.

But Othello is different. When the food is being served, he jumps over the fence, in an elegant  sort of way. He assumes the better food is somewhere else… 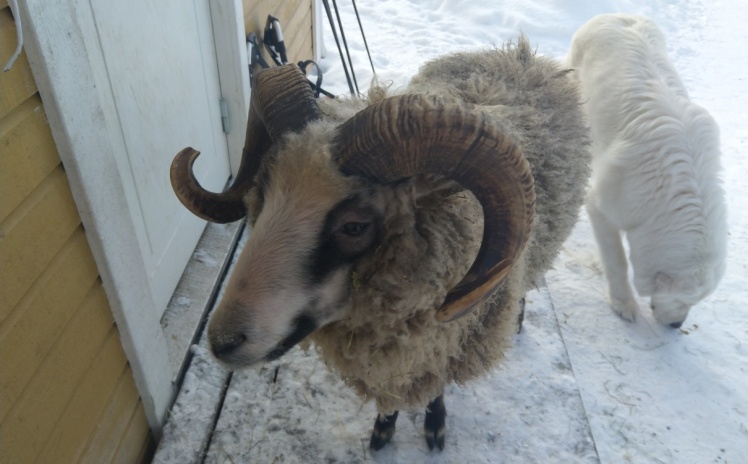 Othello often hangs out with the dogs. Many farms have sheepdogs but here we have a dogsheep. There is some sort of mutual understanding between the dogsheep and the livestock guard dogs: dogs don´t mind Othello leaving the sheep area. Dogs know Othello’s daily route and they probably know his mission too. These dogs do speak sheep after all, but also that is another story (which actually has been told in this blog already).

Behind every closed door there is a potential secret delicious food storage or an ongoing oat serving. Closed doors make Othello wary. 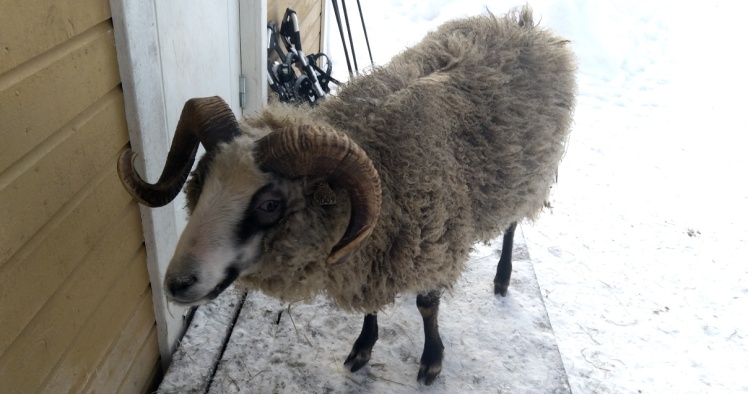 Othello lurks behind people´s door. His humans have often come out of this door with horse treats in their pockets. Something special is kept behind this door. Othello is not going to allow anyone to walk out of the door without Othello checking their pockets.

Another suspicious place is the chicken house. Chicken may be getting oats while poor sheep are eating “just hay”.

Unfortunately it is a cold winter´s day and chicken are indoors, behind the thick log walls. It is impossible to enter there right now: first you must get trough the porch door and then through the actual chicken house door. Othello has once or twice succeeded to sneak in trough an open door while the chickens are scratching in the garden. He has seen food bowls with oats in them! 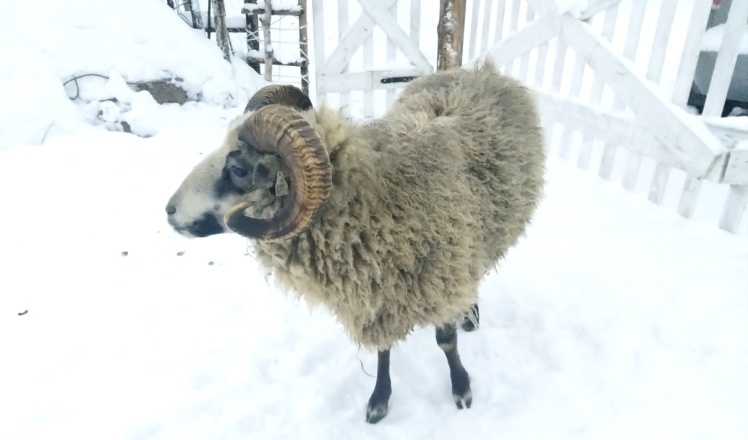 The garden  gate has to be checked.  “Kerppu”, the dried birch branches, seems to come in through this gate.  Perhaps there are some oats behind the gate too.

Finally, Othello hops back over the fence and joins the other sheep. His friends are eating hay happily, perhaps he should as well. For now.

But one of these days, Othello will figure out how to open the locked doors. Then he will expose the great oat conspiracy.  All those beautiful delicious yellow seed.

“Only small doses can be given” – that is what the humans claim. As Othello is not named after Shakespeare´s Othello, he cannot be defeated by a bit of misinformation. Being named after Leonie Swann´s Othello, he will figure out anything there is to be figured out.